Dame Susan Devoy was born on 4 January 1964 in Rotorua into a large family of squash enthusiasts. Susan was the youngest of seven children, most of whom went on to become extremely strong squash players.  Devoy won her first world title in 1984 at the age of only 21, and would win three more in her career (at this time World Opens were only held every second year). Devoy would also win eight British Opens, and add a vast collection of other Open titles from around the globe to her trophy cabinet. Incredibly, in 1988 she took six months off squash to walk the length of New Zealand, to raise money and awareness for the Muscular Dystrophy Association in New Zealand (eventually raising more than $500,000). In 1986 Devoy was awarded the MBE, which was followed by a CBE in 1993.  In 1998 she became a Dame Companion of the New Zealand Order of Merit (the youngest New Zealander to be knighted since Sir Edmund Hilary). 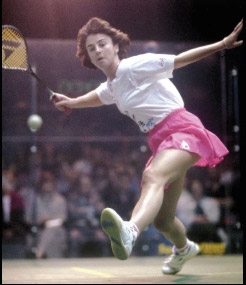