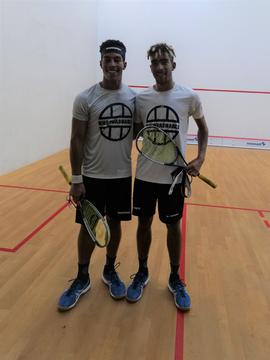 A New Zealand team of four players has been named for the WSF Men’s World Team Squash Championship in Malaysia 7-11 December 2021.

The team is full of confidence and enthusiasm after the fantastic win by Paul Coll at the British Open this week where he beat the top two players in the world in consecutive matches to triumph.

With a current PSA world ranking of four Coll leads the side and has gone through the last two world teams championships undefeated.

Current NZ Champion Evan Williams at 73 in the world is the second ranked player and is a 2018 Commonwealth Games team member. Williams is undefeated in New Zealand for nearly a year, having won titles such as the NZ Champs last November, plus the Waikato, Panmure and Auckland Open PSA Challenger events in 2021.

Waikato brothers, Lwamba and Temwa Chileshe make up the remainder of the team.Lwamba is 22-years-old and played for the New Zealand team at one previous tournament, in Washington DC in 2019 where the side finished fifth. His current PSA world ranking of 105 is a career high and he has two PSA Challenger titles to his credit as well as being a beaten finalist to Williams at the NZ Champs last year.

Younger brother, Temwa, who recently turned 21 will make his debut for New Zealand at senior level. He has a world ranking of 126, also a career high.Temwa has steadily improved his game over the past 12 months challenging and defeating a wide range of players. He was a beaten finalist to Williams at the Auckland Open in May and reached the final of three other PSA Challengers; Morrinsville Open, lost to Lwamba, Waikato Open to Williams and Northland Open to Lwamba.

“It feels great to have been selected in the team. It’s my first time selected for a senior New Zealand team and to be accompanied by my brother, Lwamba makes it even more special,” he said.

“I’m also looking forward to playing alongside the current British Open champion, Paul Coll. I think it’s going to be a great learning opportunity for me seeing and hopefully playing some of the top players in the world,” said Temwa.

The men’s world team squash championships were scheduled to be held in Tauranga, however it was transferred to Kuala Lumpur, Malaysia after Covid-19 issues made the staging of the event in New Zealand too difficult. The tournament is set to run under strict Covid-19 protocols in Malaysia.