To make it simple, you hit a little ball against the front wall and try to make it bounce twice before your opponent can get there and hit it back. Like most sports the full rules are very detailed so to make it easy to get started, below is a brief summary of the rules of squash: 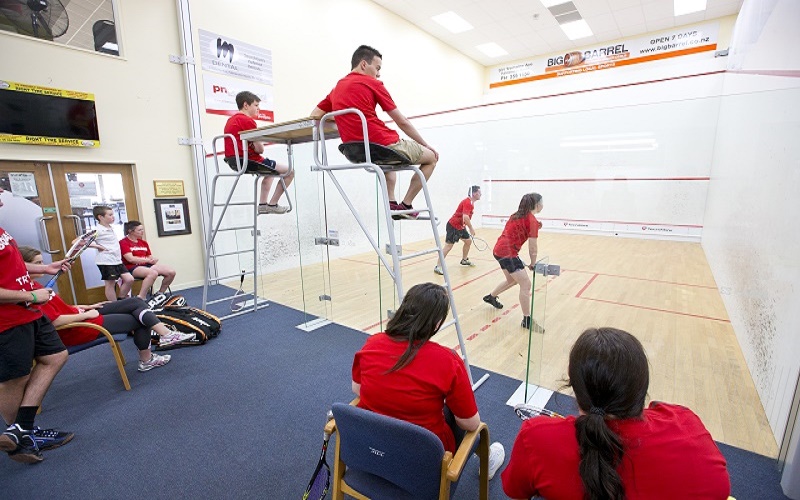 The spin of a coin or racket decides who serves first and the winner chooses which side to start from. Play commences by hitting the ball directly against the front wall with at least part of one foot on the floor within the service box. The ball must hit the front wall above the service line and below the out line so that is reaches the floor within the back quarter of the court on the opposite side.

The ball must be hit back to the front wall above the tin and below the outline before it has bounced twice on the floor. It cannot be hit twice, touch the body or clothing or bounce before it hits the front wall.

After a good return has been made, players continue to return the ball alternately until one fails to make a good return or the ball ceases to be in play, in accordance with the rules. After hitting the ball, the player must make every effort to get out of their opponents' way.

In doubles the ball must be hit by alternate teams rather an alternate players.

A let is called if your swing is impeded by your opponent and neither player wins a point.

In doubles there are more lets due to the safety of players on court.

A stroke is called if your swing is prevented by your opponent and you win a point.

In doubles it is more difficult to receive a stroke due to the nature of the game.

Matches are the best of three or five games. Each game is point a rally scoring to 11 (PAR 11). If the score in a game is tied at 10-10, a player must win by 2 clear points. Points can be scored by either player. When a player fails to serve or return the ball, in accordance with the rules, the opponent wins the point. When the returner wins a point, they become the server and add one to their score.

In doubles it is sudden death at 10-10 with the winner of the next point winning the game with matches being the best of three.

The basics of squash poster

Download our 8 basic rules poster to help you get started here.

Looking for the full rules?